Posted Aug 7th, 2018 in Canoe Polo, other, Outside News Source 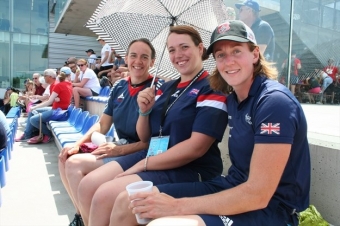 by Mike Zettel
Niagara This Week

Who would have thought two little words would make such a big difference?

Perhaps not little words, but the simple placement of Welland, Ontario.

Lucas Spinosa, owner of Black Sheep Lounge, said when it came to serving the expected visitors from 2018 International Canoe Federation Canoe Polo World Championships, a five-day competition held at the Welland International Flatwater Centre North Course, they learned from their past mistakes, or at least past missed opportunities.

When visitors went to buy T-shirts and mugs from his coffee shop during last year’s Dragonboat festival, Spinosa found they wanted more than the business name and logo; they wanted to know where the T-shirt came from.

And so this year, the place identifier was put on the merchandise.

“It seemed to work,” he said, explaining he sold much more than last year.

Spinosa said the event brought the world to Welland, with his place alone playing host to the teams from Canada, United States, Italy, Germany and New Zealand.

“It was absolutely amazing,” he said. “You got to see all these people visiting the city and seeing what we have to offer.”

He added many of these out-of-towners made their way to other businesses, such as the Seaway Mall and the farmers’ market.

Just as important, he said, the city and the BIA did a much better job this year than previous years in promoting the event among local residents, building a buzz.

One thing that was noticeable and a pleasure to hear, he said, was visitors gushing about the flatwater centre, which is arguably one of the best in the world. Other facilities in the area for sports such as basketball and baseball are also top-notch and help put Welland in a position to take advantage of the ever-important sports tourism market.

“I think they (residents) like hearing people tell us how good we have it and appreciate the facilities we have,” he said.

While the numbers aren’t finalized yet, Degazio said he’s heard good news from area hotels and restaurants, as well as other local businesses which experienced more traffic than normal.

Lynn Goulet, assistant general manager of Best Western Welland, said taking into account only confirmed group bookings, about 40 percent of her hotel’s rooms were taken up by tournament teams and families, with 275 room nights booked over 10 days.

The impact spread outside Welland as well.

Goulet said the flatwater course is about two kilometres away, and after some athletes hiked to and from it a few times, they opted to rent bicycles instead. The nearest business in Thorold quickly ran out, and they had to contact one in Niagara-on-the-Lake.

“After three or four times a day, that’s a lot of walking,” she said. “They made a lot of business in bike rentals.”