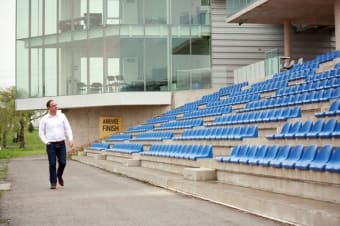 By Kris Dubé
The Welland Tribune

It's been a successful transition since the city took over operations of Welland International Flatwater Centre from Welland Recreational Canal Corp. in 2017, says the municipality's manager of recreation and culture Richard Dalton.

"I'm very confident with how the next five years at WIFC will operate," Richard Dalton says, adding the city is "relentlessly trying to make sure it's a success."

Built in 2013 for $10 million ahead of the 2015 Pan Am Games, the facility along the recreational canal has hosted a plethora of regional, provincial and international events in rowing, canoe-kayak, dragon boating, canoe polo, swimming, triathlon and more.

There are no world events scheduled this year and the only national contest in 2019 is the Canoe Kayak Canada Canoe Polo Championships, Aug. 17 and 18.

A provincial rowing championship regatta will take place on July 14.

Dalton says a year without athletes coming from all over the world is a chance to focus on bidding processes for other prestigious meets. "It's a golden opportunity now to capture some new events."

Another national canoe-kayak event in two years plus a "confidential" major dragon boat event the city has its sights on for 2020 are all part of what the future is expected to hold, he says.

"These are all balls in the air — and we advance these things consistently," says Dalton, but while knowing Welland won't "get everything" it hopes for. The national dragon boat finals are expected to return in 2020. The Welland Dragon Boat Festival was held this past weekend.

With one full-time foreman and a handful of students employed at the centre during summer months, the facility has pulled much of its success since the municipality took over from the knowledge of parks and public works staff providing fresh ideas, solutions to problems and making sure the venue is "in the best shape it's been in" since it opened, says Dalton.

"In terms of the expertise you can draw on, it's a world of difference."

Dalton says the biggest goal is to make sure the centre is getting the best bang for its buck. "It was a big investment, and the taxpayers are heavily invested here," he says, adding the site is an "enormous" part of Welland's identity. He also says residents have the right to be keeping an eye on how busy the facility is. "That's what the public wants — they want to know this building is being well used."

Last year, 600 athletes from 26 countries hit the water for the World Canoe-Polo Championships. Large-scale events such as this are great to learn from, says Dalton. Issues related to transportation, participants coming from around the world, weather — these are all important matters.

"Every time we've run a big event, we've learned something.

"There are a lot of ways an event can go wrong, but only one way it can go perfectly."

WIFC also offers an indoor paddling tank which can be booked for private events.